When I launched livingmaxwell at the end of December, I realized that I needed to get my act together in regards to social media. Having immersed myself in this space over the past few months, I now pay particular attention to how other organic food businesses use social media.  My overall impression so far: I […]

When I launched livingmaxwell at the end of December, I realized that I needed to get my act together in regards to social media.

Having immersed myself in this space over the past few months, I now pay particular attention to how other organic food businesses use social media.  My overall impression so far: I am extremely unimpressed.

No surprise here.  Whole Foods leverages social media better than most companies in the world.  Not only were they a very, very early user on Twitter but how many corporations have their own Flickr page?

These people know what they are doing and their stats confirm this.  235,000 fans on Facebook and 1.75 million followers on Twitter.

This is so smart.  At every physical business, there should be signs alerting people as to the company’s social media presence.  The reminder has to be constant and everywhere, both offline and online.

Whole Foods gets this.  A+.

If you follow me on Twitter, you know that I often take pictures of the food I eat and juices I drink.  So, whenever I go to an organic restaurant, I always ask the waiter or waitress if they have a Twitter page.

The response is either “I think so” or “You know, I’m not really sure.  Let me find out.”

When I was in San Francisco recently, my friends and I went to Gracias Madre, an organic Mexican restaurant owned by the great people who also run Cafe Gratitude.  While we were waiting for a table, I asked two waiters if they had a Twitter page.  Neither of them knew.

I then proceeded to pick up a menu and found something that I hadn’t seen before.

Underneath the hours was a section devoted to social media.  I have yet to encounter a restaurant who does this, and it immediately caught my attention.  I found the website address and the Twitter page, and was encouraged to become a fan on Facebook.

I left there thinking that it was a little strange the waiters didn’t know the Twitter address, even though it is printed on the menu.  Nevertheless, I will cut Gracias Madre some serious slack here because (a) what they are doing on the menu is outstanding and (b) I hear the food is phenomenal.  We didn’t stay because the wait was too long, and we were incredibly hungry.

Next time I am in San Francisco I promise to go to Gracias Madre and tweet some pictures.  And, I won’t be asking them again if they have a Twitter page.

Please connect with me on:

Do you know other organic food businesses that use social media well?  If so, please comment below.  I’d love to hear about them. 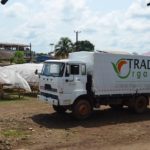