As Beyond Meat’s very successful IPO is bringing a lot of attention to the alt-protein category, it is important to take a look at what exactly are in these food products. One popular name in this space is the Impossible Burger, a product we first wrote about in 2017 when Freedom of Information Act (FOIA) […] 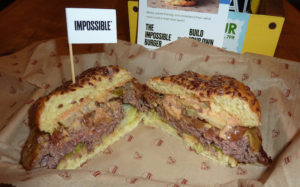 As Beyond Meat’s very successful IPO is bringing a lot of attention to the alt-protein category, it is important to take a look at what exactly are in these food products.

One popular name in this space is the Impossible Burger, a product we first wrote about in 2017 when Freedom of Information Act (FOIA) documents uncovered that the FDA disagreed with the company’s safety assessments of the burger’s main ingredient — soy leghemoglobin. However, the company continued selling it to the public anyhow without informing consumers about the FDA’s very serious concerns.

The issue this time around with the Impossible Burger is the amount of glyphosate that it contains.

According to Moms Across America, who had the product tested at Health Research Institute Laboratories, the levels of glyphosate were 11x that of the Beyond Meat burger and the total result (glyphosate and its metabolite AMPA) came in at 11.3 parts per billion (ppb).

Why should consumers care about glyphosate?

Because glyphosate is known to the State of California to cause cancer and the World Health Organization says it is “probably carcinogenic to humans.” — which means that it “probably causes cancer to humans.” Glyphosate also happens to be the primary ingredient in Monsanto’s Roundup herbicide, and approximately 250 million pounds of this weed killer are sprayed each year in the U.S.

Recent court cases, including the $2 billion judgment to a couple whose non-Hodgkin’s lymphoma was caused by Roundup, have provided more evidence of how harmful this chemical is.

So, the Impossible Burger not only contains a genetically-modified protein that has never been in the human diet until a few years ago, but it has also tested positive for glyphosate.

Additionally, company founder Pat Brown wrote the other day that the Impossible Burger will now be using GMO soy in its burgers. Genetically-modified soy is sprayed with Roundup and is one of Monsanto’s most important products.

“We are shocked to find that the Impossible Burger can have up to 11x higher levels of glyphosate residues than the Beyond Meat burger according to these samples tested. This new product is being marketed as a solution for ‘healthy’ eating, when in fact 11 ppb of glyphosate herbicide consumption can be highly dangerous. Only 0.1 ppb of glyphosate has been shown to alter the gene function of over 4,000 genes in the livers, kidneys and cause severe organ damage in rats. I am gravely concerned that consumers are being misled to believe the Impossible Burger is healthy,” said Zen Honeycutt, Executive Director of Moms Across America.

If you’re looking to switch to a vegan diet or consume less meat, there are numerous organic meatless options out there, such as Hilary’s Veggie Burgers or Don Lee Farms, products that are not genetically modified and whose ingredients have not been sprayed with glyphosate.

While the Impossible Burger may be generating a lot of hype and is Instagram-worthy because of how it “bleeds”, it carries elevated levels of glyphosate when compared to its non-organic peers, and its key ingredients are not found in nature but are manufactured in a laboratory.

Is eating the Impossible Burger a risk worth taking?

As the Institute for Responsible Technology has pointed out, GMOs carry many health risks.

But maybe Steven Molino (who now Tweets under @steven_molino) can answer this for us.

On Twitter, he said that 20 minutes after eating his first Impossible Burger at Bareburger, he “went into anaphylactic shock & taken to ER. Never happened to me before…” His Tweet about going into “anaphylactic shock” has since been deleted. 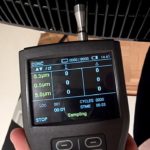 Is Your Air Purifier Removing Dangerous Ultrafine Particles? We Test the Intellipure vs. the Molekule and the Dyson