As someone who has eaten close to 100% organic since 2001, my personal experience is that women are more concerned than men about the quality of food they are putting into their bodies. While this is based on anecdotal evidence, there are a few data points to back this up. The Pew Research Center’s recent […] 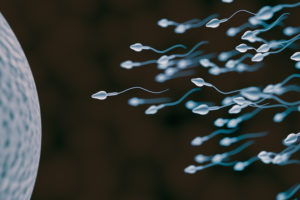 As someone who has eaten close to 100% organic since 2001, my personal experience is that women are more concerned than men about the quality of food they are putting into their bodies.

While this is based on anecdotal evidence, there are a few data points to back this up.

According to Google Analytics, approximately 2/3rds of Living Maxwell readers – people reading about organic – are women.

So, to make a general statement that women care more about organic food than men is not exactly going out on a limb.

While many men may perceive organic food to be a nuisance or something that they don’t need to worry about, a report out of Harvard is sure to make them change their minds.

A Harvard study concluded that dietary exposure to pesticides has been linked to “a lower total sperm count and a lower percentage of morphologically normal sperm among men.”

338 semen samples were taken from 155 men, in an 18-month period from 2007 to 2012. In each sample, the concentration of sperm and level of movement were evaluated by computer-aided semen analysis (CASA). Fruits and vegetables were categorized as containing high or low-to-moderate pesticide residues based on data from the annual USDA Pesticide Data Program.

After taking into account confounding factors, such as weight and lifestyle habits, researchers found that men exposed to the highest levels of pesticide residues through fruit and vegetable consumption had almost 50% fewer sperm and more abnormally shaped sperm than men who consumed the least amount of pesticides.

In his conclusions, Jorge Chavarro, the study’s senior author, unsurprisingly said that “Implementing strategies specifically targeted at avoiding pesticide residues, such as consuming organically-grown produce or avoiding produce known to have large amounts of residues, may be the way to go.”

For me, it is not “may be the way to go.” Eating organic is the only way to go.

And if pesticide-laden fruits and vegetables are having this kind of impact on our sperm, imagine the harm that pesticides are causing to the rest of our body?

If you’ve been eating non-organic food your entire life, there is no reason to panic. Based on studies, it has been proven that switching to an organic diet can reduce pesticide exposure by up to 90%.

But don’t delay in getting started with organic.

Here are some other things that may be helpful.

* To understand the priority of which organic foods should be eaten first, make sure to read my post — Should You ALWAYS Eat Organic?

* To find out which fruits and vegetables have the highest levels of pesticides, here is The Dirty Dozen.

It is important to remember that anything not on the Dirty Dozen list does not mean that conventionally-grown fruits and vegetables can be consumed. It simply means that these 12 are the most sprayed.

The only one I use and recommend is from Vermont Soap Organics called Produce Magic.

* If you are really serious about your health, it is critical that you get an air purifier for your home or office. Air pollution has been deemed to be more harmful than passive smoking.

By far, the best air purifier on the market is The Intellipure, and it is the one I run 24/7 in my apartment.

* Share this post with all of your friends and family, so they can know the truth about how harmful pesticides truly are.