How Much Poison Should We Feed Our Children Today?

Based on some things that I have been writing about lately and reading in the news, it got me thinking. There is complete acceptance, tolerance, and even encouragement in our country for people to eat conventionally-grown food, which has been sprayed with synthetic pesticides. And make no mistake about it. Food sprayed with these pesticides […]

Based on some things that I have been writing about lately and reading in the news, it got me thinking.

There is complete acceptance, tolerance, and even encouragement in our country for people to eat conventionally-grown food, which has been sprayed with synthetic pesticides.

If you drank enough of it, you would die.

Here are some troubling examples that should alarm people.

– President Obama and the USDA are very close to approving genetically-engineered corn that is resistant to 2,4-D.

For those who don’t know, 2,4-D was an active ingredient in Agent Orange, the herbicide warfare program used in Vietnam that killed 400,000 people and caused birth defects in another 500,000.

If approved, an incredible amount of 2,4-D will be sprayed on this genetically-engineered corn, which will end up in our food and water supply. It will also contaminate nearby crops.

– The Grocery Manufacturers Association has estimated that approximately 75-80% of the food on supermarket shelves contains genetically-modified organisms (GMOs). Nearly all GMOs are sprayed with dangerous chemicals, and the government massively subsidizes the GM-industry.

– In the aggregate, EPA-registered pesticides contain nearly 900 active ingredients, many of which are toxic. Many of the inert ingredients in pesticides also are toxic, but are not required to be tested for causing chronic diseases such as cancer. (From the President’s Cancer Panel)

According to the the EPA, approximately 1.2 billion pounds of pesticides are used each year.

When the Environmental Working Group (EWG) put out its Dirty Dozen, the list of the most pesticide-sprayed fruits and vegetables, a group called the Alliance for Food & Farming demanded that the EWG stop publishing this list.

The Alliance for Food & Farming, which is funded by the Produce Marketing Association, has a whole website dedicated to coaxing people into thinking that pesticides are safe to consume.

In the last few days, I went after the world-renowned Dana-Farber Cancer Institute for claiming that “there is no scientific evidence that organic food provides health benefits.”

Outraged that a leading cancer hospital could say something like this, I called Dana-Farber’s statement “factually incorrect and morally reprehensible.”

Under pressure, Dana-Farber retracted this statement but went on to say that “it’s better to eat conventional fruits and vegetables than none at all.”

How do we know that it is better to eat conventionally-grown fruits and vegetables (which have been sprayed with dangerous pesticides) than none at all?

More importantly, why doesn’t this major cancer institution make a statement that is consistent with what the President’s Cancer Panel is saying?

In its report, the President’s Cancer Panel (PDF File) recommended that people avoid eating food that is grown with pesticides.

Demand for organic food continues to boom because people are increasingly coming to realize that what they feed their families must be free of harmful chemicals.

And you don’t need to have a medical degree to understand that dangerous pesticides, in any amount, should be kept out of a person’s body, particularly for children.

It is “particularly concerned that the true burden of environmentally induced cancer has been grossly underestimated. With nearly 80,000 chemicals on the market in the United States, many of which are used by millions of Americans in their daily lives and are un- or understudied and largely unregulated, exposure to potential environmental carcinogens is widespread” and says that “children are far more vulnerable to environmental toxins and radiation than adults.”

As you sit down to dinner tonight, ask yourself what is the acceptable amount of poison you’d be willing to put on the plates of your children.

For me, the answer is none. 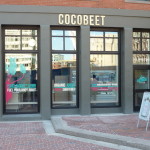 Cocobeet is a MUST-VISIT Organic Juice Bar in Boston