Beware: Monsanto Hires a Millennial to Convince Other Millennials that GMOs are Okay

UPDATED 1/4/15: This post was updated to reflect the Twitter conversation below. This past weekend, I came across something that made my skin crawl. Wanting to persuade (fool) young people that both Monsanto and GMOs are actually good for the world, the company has hired a 32-year-old Director of Millennial Engagement named Vance Crowe. Whether he is traveling […] 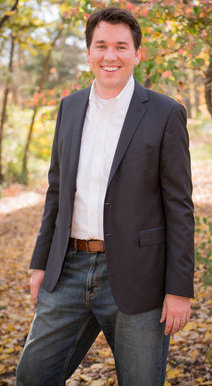 This past weekend, I came across something that made my skin crawl.

Wanting to persuade (fool) young people that both Monsanto and GMOs are actually good for the world, the company has hired a 32-year-old Director of Millennial Engagement named Vance Crowe.

Whether he is traveling alongside company salesmen or attending conferences around the country, such as SXSW Eco Conference in Austin, this Directory of Millennial Engagement is actively engaging with his peers to reverse the overwhelmingly negative sentiment against Monsanto.

In a frightening interview with NPR’s The Salt, Vance Crowe shared a little bit about what he is up to and what he is telling his fellow millennials.

Let me summarize a few of the things that he said and what the truth is.

Vance Crowe: To me the science on GMOs is very clear, so why do people have trouble with this?

On one hand, the science is very clear.

In its study Failure to Yield, the Union of Concerned Scientists reported that the biotech industry has been carrying out gene field trials to increase yields for 20 years, all without significant results.

This is ironic because GMOs are constantly touted as a way to increase crop yields.

Additionally, GMOs have caused a massive problem of superweeds and have resulted in a huge increase of pesticide use.

On the other hand, the science isn’t clear at all because no long-term studies have ever been conducted to test the safety of GMOs.

Vance Crowe: A lot of people believe Monsanto is in the habit of suing farmers. But it’s not true.

Actually, it is true. Since 1997, the company has filed 145 lawsuits against farmers or on average about one lawsuit every three weeks for 16 straight years.

Furthermore, Monsanto aggressively threatens to sue farmers whose farms have been contaminated by its GMOs, even when these farmers have no idea that it has happened. Because these farmers don’t have the means to fight against Monsanto in the courts, most of them end up settling.

One farmer who refused to be intimidated by Monsanto’s brutal tactics was Canadian farmer Percy Schmeiser.

Vance Crowe: It’s clear consumers have some strong feelings about how food should be produced and what sustainability is. And the tenor has gotten kind of loud…..it doesn’t do anybody any good if people are so passionate that they’re yelling.

Maybe the reason that people are so loud and so passionate that they’re yelling is because they believe Monsanto is wreaking havoc on the world and is working hard to deny Americans their right to know what is in their food.

– Why did Haiti burn Monsanto’s seeds after the brutal earthquake in 2010?

– Why have there been massive protests in Hawaii regarding the spraying of super-toxic pesticides being sprayed near schools and hospitals?

– Why do 64 countries around the world require GMOs to be labeled but the U.S. does not?

– Why has Monsanto been spending tens of millions of dollars to fight against GMO-labeling in California, Washington, Oregon, and Colorado in the past few years?

The truth is that many people, myself included, despise Monsanto and for very good reasons.

If you know anyone in the 20s or 30s, please share this post with them and make sure that they see the following movies: Food, Inc., The Future of Food, and GMO OMG.

It is critical that millennials in this country are not fooled by people such as Vance Crowe and have a clear understanding of what Monsanto is really doing to this world.

This is the same old tired and weak argument that critics use all of the time. But don’t let this “sound bite” fool you.

The only thing that Vani Hari is spreading is the truth, something that is very threatening to the big food and chemical companies. And the truth is the litany of despicable business practices in the food industry that she has exposed over these past few years.

Based on what Vance Crowe tweeted below, one could infer that anyone who is for GMO-labeling and promotes organic food is someone who is “selling snake oil”.

I’d love for anyone who has a shred of intellectual honesty to tell me how food that is grown without super-toxic pesticides, without risky GMOs, and without artificial colors or preservatives is even remotely related to “snake oil”.

Despite Vance Crowe’s best efforts to prove otherwise, organic is the food that America wants and it is the healthiest and safest food on the planet. 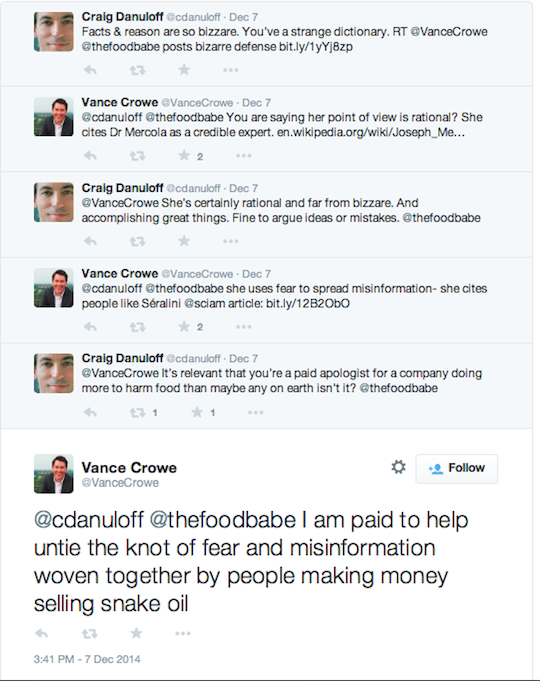