I got a message from a reader the other day on Facebook about a Health.com story that made her quite concerned. And rightly so. The article is titled “27 Mistakes Healthy People Make” and the #2 mistake was that “you always buy organic”. It starts off by saying “Buying organic is wise for certain foods, […] 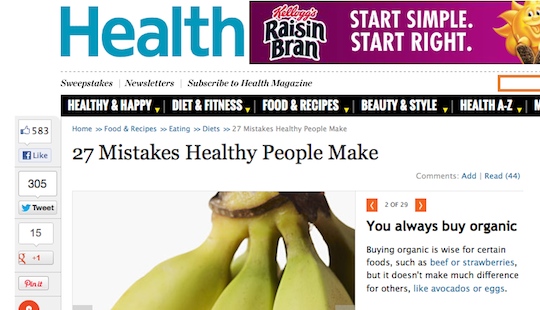 I got a message from a reader the other day on Facebook about a Health.com story that made her quite concerned. And rightly so.

The article is titled “27 Mistakes Healthy People Make” and the #2 mistake was that “you always buy organic”.

It starts off by saying “Buying organic is wise for certain foods, such as beef or strawberries, but it doesn’t make much difference for others, like avocados or eggs.”

It alarms me that a website with such a giant readership could mislead people so badly. To say that it doesn’t make much of a difference to buy conventional eggs versus organic eggs is simply preposterous.

Organic egg production prohibits the use of antibiotics and growth hormones, the use of feed sprayed with toxic chemicals, and the use of feed that has been genetically-modified. Furthermore, there are minimum requirements in terms of floor space and access to the outdoors.

How on earth can any reasonable and intelligent person say there is no difference between the two????

The sad part is that many, many people have already read this article and now believe Health.com’s statement to be true.

Even if a food item is on the Environmental Working Group’s Clean 15 – the list of conventional foods that receive the least amount of pesticides – it is still sprayed with toxic chemicals but just to a lesser degree.

Chemicals, antibiotics, synthetic growth hormones, and genetically-modified ingredients have absolutely no business being in our bodies. Don’t let anyone try to convince you otherwise or that they are harmless in small quantities. When we ingest something in small quantities over and over again, it no longer is a small quantity. It is a much larger quantity.

This isn’t just some organic food proponent talking about the health risks of chemicals. It is what the medical experts believe as well.

The report also said that “the true burden of environmentally induced cancer has been grossly underestimated. With nearly 80,000 chemicals on the market in the United States, many of which are used by millions of Americans in their daily lives and are un- or understudied and largely unregulated, exposure to potential environmental carcinogens is widespread.”

In order to protect the health of your family, do whatever you can to keep these toxic chemicals out of your body.

1) For those of you who eat eggs, be sure to check out the Cornucopia’s Organic Egg Scorecard. It’s an excellent resource.

2) I don’t know about you, but it makes me cringe to see a health article right next to a big advertisement from Kellogg’s.

Not only did Kellogg’s spend nearly $800,000 to defeat Proposition 37, California’s recent GMO-labeling ballot initiative, but it is the proud owner of Kashi, a company which is facing a class action lawsuit for using hazardous substances in its “all-natural” products.

Want to stay up-to-date on the latest health and organic food news? If so, make sure that you are on my newsletter list. 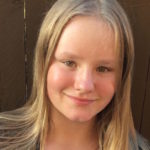