The next time I speak with Walter Robb, the Co-CEO of Whole Foods, I can’t wait to ask him the following question: So, how does it feel to be a rock star? This was the jaw-dropping scene from when he and his colleagues opened Whole Foods’ highly anticipated Detroit store, located at 115 Mack Avenue. […] 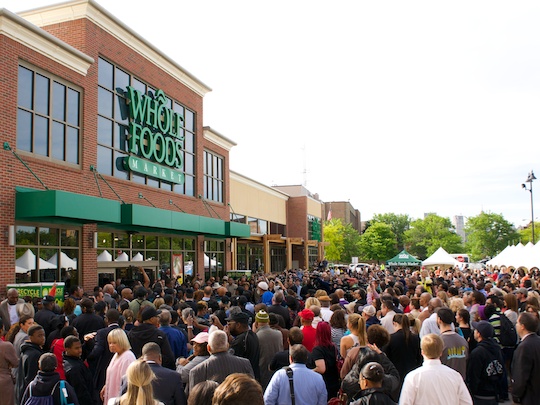 The next time I speak with Walter Robb, the Co-CEO of Whole Foods, I can’t wait to ask him the following question: So, how does it feel to be a rock star?

This was the jaw-dropping scene from when he and his colleagues opened Whole Foods’ highly anticipated Detroit store, located at 115 Mack Avenue.

While I have never attended an opening of a Whole Foods store before, I cannot imagine that there has ever been quite a reception like the one above.

Yet, the new Detroit store is by no means your average Whole Foods location. It is the company’s first inner-city store and has been the subject of close attention in the Detroit media since 2008. Additionally, it has been of tremendous personal importance to Walter Robb.

“We’ve worked toward this day for nearly five years. We’re inspired by what Detroiters are doing for this great city,” the Co-CEO of Whole Foods said. “They are our partners, our neighbors, our team members, and our friends. We couldn’t be prouder or happier to be part of the mix.”

Aside from having Detroit Mayor Dave Bing and Senator Debbie Stabenow in attendance, Whole Foods made sure that local groups were well-represented, and engaging the community was a very big part of the day.

The entertainment lineup included local jazz, dance, and choir ensembles, and the Detroit store was working with three local charities on opening day: the Coalition on Temporary Shelter (COTS), which provides support to Detroit’s homeless; Sisters Acquiring Financial Empowerment (SAFE), which helps victims of domestic violence; and Gleaners Community Food Bank, an organization that brings food to the hungry in southeast Michigan.

Upon checkout, shoppers voted to determine the type of donation each charity would receive. One will earn 5 percent of the five Michigan stores’ profits on a future date, one will benefit from the “one dime at a time” program from all five Michigan stores from July through September, and one will receive a donation of $250.

It will be interesting to see how this Detroit store performs and whether Whole Foods can make the business case to enter other inner-city locations.

One thing is for sure, however. There is no shortage of demand.

Mayors from Chicago, New Orleans, Newark and others places have all been clamoring for Whole Foods to do the same in their cities. And for good reason.

“The opening of the first Whole Foods Market in Detroit is a game changer for our city,” said Mayor Dave Bing.

Want to stay up-to-date on the most interesting and important organic food news? If so, make sure that you are subscribed to my newsletter list.