The Risk of Buying Conventional Honey

For many of us who understand the importance of organic, we eat and buy organic food without thinking about it. We know that we don’t want to consume food that contains artificial growth hormones, synthetic pesticides or genetically-modified organisms (GMOs). We know that it is essential for us to purchase the highest quality food possible. […]

For many of us who understand the importance of organic, we eat and buy organic food without thinking about it.

We know that we don’t want to consume food that contains artificial growth hormones, synthetic pesticides or genetically-modified organisms (GMOs).

We know that it is essential for us to purchase the highest quality food possible.

We know that food is medicine.

Yet, there are too many people out there who are just not that concerned about the food that goes into their bodies. They largely assume that since our government allows it on the shelf, it is safe.

Well, maybe the recent news will make them think otherwise.

As I Tweeted about earlier this week, there is major corruption within the organic industry in China.

Except for the goji berries from Sunfood, I do not buy any organic food that comes from this country

I know the people at Sunfood well, have had numerous discussions with them about these goji berries, and believe that Sunfood’s management is incredibly rigorous and scrupulous when it comes to providing a clean and pure product.

Along with organic food, the conventional food from China is very problematic as well. And this includes honey.

According to Food Safety News in its recently released report, more than 75% of the honey sold in U.S. grocery stores isn’t exactly what the bees produce and 1/3rd of all honey sold in the U.S. is smuggled from China.

Food Safety News purchased more than 60 jars, jugs and plastic bears of honey in 10 states and the District of Columbia, had all of the honey individually tested, and found the following results.

• 100% of the honey sampled from drugstores, such as Walgreens, Rite-Aid and CVS Pharmacy, had no pollen.

• 77% of the honey sampled from big box stores – Costco, Sam’s Club, Walmart, Target and H-E-B – had the pollen filtered out.

• 100% of the honey packaged in the small individual service portions from Smucker’s, McDonald’s and KFC had the pollen removed.

• Every single sample purchased at farmers markets, co-ops and “natural” stores, like PCC and Trader Joe’s, had the full, anticipated amount of pollen.

In terms of organic honey, 5 out of 7 samples were heavy with pollen. All of the organic honey was from Brazil.

WHY SHOULD WE CARE ABOUT POLLEN LEVELS?

Pollen that has been filtered out of honey means that the honey does not meet international quality standards and cannot be traced back to its country of origin.

According to Food Safety News, the FDA had either been told of, or had stumbled upon, Chinese honey contaminated with chloramphenicol and other illegal animal antibiotics which are dangerous, even fatal, to a very small percentage of the population. Furthermore, numerous mom-and-pop producers of honey in China have had problems with lead contamination.

Many people buy honey for its medicinal properties and if there is no pollen in the honey, it is not honey and it largely defeats the purpose of buying this product.

It is very obvious that eating conventional honey is most likely going to result in an inferior and potentially dangerous product, which likely comes from China, a country that has demonstrated little concern for food safety.

Therefore, your best bet is either to buy organic or local.

As I wrote about earlier this year, there is no such thing yet as USDA certified organic honey. Even though there is honey for sale that has the USDA seal, there are no federal regulations concerning honey.  (I go into the details of this issue in the post.)

To be honest, I was disappointed that only 5 of 7 the organic brands tested heavily for pollen. This isn’t acceptable but I hear plenty of corruption rumors in the organic industry outside of the U.S.

In the tests above, the honey from the farmers markets and natural food stores scored 100%.

One could assume that many, if not all, of these honey samples came from small, local apiaries.

Given that there are no USDA federal guidelines regarding organic honey and all of the organic honey that I have seen in supermarkets comes from Brazil or Canada, many people will opt to buy local honey, ideally from a small beekeeper where you can ask about their production methods.

It is imperative to find out is what is being used in the hives.  If you hear Apistan strips or coumaphos, that is a bad sign.

These are toxic chemicals used in conventional honey to kill Varroa Mites in the hive.

What this issue with conventional honey points to is that we need to be very vigilant about the food we are buying and feeding to our families.

Just because it is on the shelf does not mean that it is safe.

The safest and healthiest food that we can be buying is organic food. Why?

If health and high quality food is important to you, please tell the FDA to require the labeling of GMOs.

We are the only developed country in the world that does not require GMOs to be labeled, and this must change immediately.

Thank you for your support of organic food. 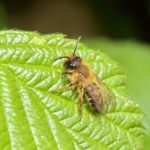