In 1994, Clay Gordon decided that he wanted to learn as much as he could about chocolate and looked for a chocolate critic to guide him. Since there wasn’t a single person doing it at the time, he decided to become one himself and embarked on a career as a chocolate expert. In 2001, Clay […] 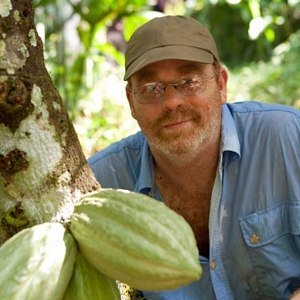 In 1994, Clay Gordon decided that he wanted to learn as much as he could about chocolate and looked for a chocolate critic to guide him.

Since there wasn’t a single person doing it at the time, he decided to become one himself and embarked on a career as a chocolate expert.

As a leading independent authority on chocolate and founder of the New World Chocolate Society, Clay Gordon conducts chocolate tastings and classes around the country and is often quoted in The New York Times, The Wall Street Journal and Bloomberg Business Week.

Given that I am novice when it comes to chocolate yet interact with organic chocolate companies on a regular basis, I had many questions for Clay Gordon when we spoke on the phone yesterday.

Max Goldberg: What is the difference between cocoa powder and cacao powder?

Clay Gordon: It is absolutely the same thing but the reason people use one or the other is based simply on language. Cocoa is a lot easier for people to pronounce.

People in the raw food world use cacao to try to differentiate their raw powder from cooked powder.

At the end of the day, however, cacao and cocoa are the exact same thing.

Max: Where does the best cacao come from?

Clay: Ecuador has excellent cacao, particularly its nacional variety. Peru is the home of a bunch of many highly-prized varieties, and Bolivia has high-quality beans including wild-harvested ones.

Venezuela has a very high-end chocolate community. There is a small cooperative there in Chuao, which many people believe produces the best beans in the world.

Mexico also has great some cacao, and I might throw Madagascar in there as well.

Max: What about Bali? There is a lot of buzz about them, especially in the organic raw food world.

Clay: Historically, Indonesia has never been known as a producer of high quality cocoa for the gourmet market, in part because they don’t ferment it. They tend to dry it over fire and this adds the taste of smoke to the cocoa.

In Bali, Ben Ripple and Frederick Schilling, founder of Dagoba Organic Chocolate, are doing something interesting with raw cacao at their Big Tree Farms operation. They are controlling every step of the process, from how the beans are grown to how the raw powder is processed, which is never heated above 118 degrees.

It is not that organic raw cacao is so unique. It is just that one operation has very tight control over the entire process, so that the integrity of the raw cacao product is not compromised.

Usually, it is different companies responsible for different aspects of production.

Max: What is the indicator of really good chocolate?

From a technical standpoint, really good chocolate appeals to all of the senses – good texture, it looks good, it smells good and it feels good.

But many chocolates that have these qualities are just boring or bland. Or, they are under-roasted or over-roasted.

Lastly, is the flavor really satisfying? Taste is very personal.

One important note is that many people believe for chocolate to develop flavor, the beans must be fermented. There must be chemical and thermal changes within the bean.

If you don’t ferment cacao, you still get a chocolate flavor but it is one-noted, not a whole lot of nuance. When you ferment beans, you get a lot of flavors.

Max: What is your perception of the organic chocolate market?

Clay: Organic is not an indicator of quality flavor. It is how something was grown and follows a certain kind of accepted process.

With chocolate, the cacao trees may be organic but the manufacturer may also do a bad job of fermentation. So, that can be a real problem.

When you talk about the most highly regarded chocolate in the world, very few of them have certified organic beans.

This isn’t because they don’t want to use organic beans. Rather, these companies have trouble sourcing certified organic beans in the quantities that they need and that also meet their quality of standards.

Max: What are your favorite organic chocolates?

Clay: I don’t buy chocolate because it is organic. However, there is a company in Switzerland called Felchlin that makes conventional and organic bars.

They have an organic bar called Cru Hacienda Elvesia, which is 74% cocoa, and it is grown in the Dominican Republic. This one really sticks out in my mind.

Max: What are your thoughts on raw organic chocolate?

Clay: People who eat raw organic chocolate are more concerned with nutrition than with taste.

They are willing to eat things that are unpalatable because of nutritional value.

Max: In closing, what are a few things that you would like people to know about chocolate?

Clay: First, there is not supposed to be anything virtuous about chocolate.

It is all about enjoyment. It is about eating something good and sharing this food with other people.

If we are craving something, it is our bodies telling us something.

Second, if we are truly interested in maximizing health benefits from cocoa, we have to go back to how the Aztecs and other ancient civilizations were doing it.

This means you should be drinking cocoa instead of eating it. Take a tablespoon of raw cacao powder in water or milk, add a sweetener or not, maybe cinnamon and drink it on an empty stomach.

There is a fundamental difference between how the body processes beverages versus food. A drink goes right to the small intestine while food gets digested in the stomach first.

Max: Thanks so much Clay!

My Take: The interview with Clay Gordon was one of the most interesting and educational that I have done. I could have had him on the phone for many, many hours and having him host a tasting would be an amazing night.

There is something incredibly alluring about chocolate and discussing the nuances and complexities of this amazing food with a world-renowned expert was fantastic.

My few takeaways from the conversation were:

1) For many people, Clay Gordon included, taste is the key factor for deciding which chocolate to eat.

I am the first to admit that I am an outlier and am quite different from many people in how I eat, but nutrition drives my decision-making when it comes to eating food, chocolate most certainly included.

That is simply my personal take on it as I tend to view food in a very different way than many others. My view is not right or wrong, but it is just mine.

And while I am by no means a raw foodist, I think there are many raw organic chocolates that taste very, very good.

2) Clay Gordon made a statement about organic chocolate that I thought was very insightful. He said that just because the beans are organic doesn’t mean that the chocolate, the end-product, will taste good.

The manufacturing process, including fermentation and roasting, plays a major role in what the chocolate tastes like.

This is something that many people, myself included, probably overlook.

3) What Clay Gordon said about maximizing nutrition from cacao by drinking it, rather than eating it, was quite interesting.

Even though I use raw cacao powder in my morning smoothie each day, I rarely, if ever, drink it straight with water. A very good tip.

What I tend to forget that is that one of my Top Organic Products from the 2010 Expo West Trade Show was an organic cacao tea from East Bluff Trading Company (now known as Tisano).

This cacao tea, while not the exact same, is essentially what Clay Gordon was referring to.

If you are interested in chocolate, definitely check out Clay Gordon’s book Discover Chocolate: The Ultimate Guide to Buying, Tasting and Enjoying Fine Chocolate. It is a fascinating read and will make for a great gift.