Several months I wrote a story about Bisphenol-A (BPA) in organic food cans. The post continues to get a lot of views because people are becoming increasingly aware and concerned about the packaging that their food comes in, even in organic food products. With news coming out of Maine this morning, parents now need to […]

Several months I wrote a story about Bisphenol-A (BPA) in organic food cans.

The post continues to get a lot of views because people are becoming increasingly aware and concerned about the packaging that their food comes in, even in organic food products.

With news coming out of Maine this morning, parents now need to take extra precaution about what they feed their young kids. Why?

BPA, which is known as a developmental, neural, and reproductive toxin, was found in 11 of 12 baby and toddler foods tested by The Alliance for a Clean and Healthy Maine.

Six of the 12 samples were organic, and five of the organic samples contained BPA. The five were:

What is particularly interesting is that these five samples were organic foods that came in glass bottles with metal lids. So, it was the lids that were tested for BPA and came back positive.

According to The Alliance for a Clean and Healthy Maine, Earth’s Best will be phasing out its use of BPA and will no longer use this chemical as of October 2012.

Parents in Maine are very, very aggressive about getting BPA out of food containers for kids and will do whatever it takes to make sure their children are protected.

As of January 1st, BPA has been banned in new, reusable beverage containers sold in Maine under rules adopted through the 4-year-old state law known as the Kid-Safe Products Act.

The next goal is to phase out the use of BPA in foods intentionally marketed to children under the age of three, such as infant formula and baby foods.

After that, concerned parents will educate candidates running for the Maine legislature and ask them to pledge their support for new legislation that would authorize a phase-out of BPA in all foods.

1) I remain a big advocate of using glass over cans or plastic containers.

Yet, what these findings are telling us is that we need to continue to press organic food companies to ban all BPA, even in lids and other forms of packaging.

This also means making inquiries as to whether your preferred organic brands are using BPA or not. This is an area that I will soon tackle and report back to you on.

2) Make as much fresh food for your kids as possible without the use of any cans, glass bottles or plastic.

The bodies of babies and kids are still developing, and they are much more susceptible to the harms of BPA and others chemicals than adults are.

3) I LOVE what the citizens in Maine are doing, and they are setting an amazing example for the rest of the country.

They are getting extremely involved and not tolerating the nonsense that politicians, most of whom are utterly beholden to industry, tell us.

Maine’s governor, Paul LePage, strongly opposed the current ban on BPA, as he didn’t believe there was enough scientific evidence on the issue, and said the worst case scenario would be that some women would get “little beards”. (Can you imagine having a governor in your state talk like this? Someone that you elected and whose salary is being paid by your tax dollars.)

Well, Maine lawmakers thought differently than the governor. They voted 35-0 in the Senate and 145-3 in the House last year to ban BPA in reusable beverage containers.

It is clear to me that these activists in Maine need to take a greater role in national policy. They know how to make things happen. Period. 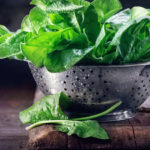 Why Conventional Spinach is NOT a Smart Choice