UPDATED AS OF 1/21/17: President Trump has just signed an executive order removing the U.S. from the Trans Pacific Partnership (TPP). Read below why this is such a good move and why TPP is so dangerous. To stay up-to-date on the most important organic food news, be sure to subscribe to Organic Insider. — You […] 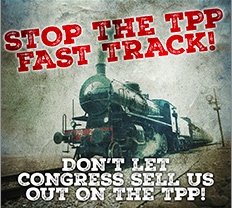 UPDATED AS OF 1/21/17: President Trump has just signed an executive order removing the U.S. from the Trans Pacific Partnership (TPP). Read below why this is such a good move and why TPP is so dangerous.

To stay up-to-date on the most important organic food news, be sure to subscribe to Organic Insider.

You may have heard in the news about the global trade agreements that President Obama is trying to push through.

While they may sound relatively harmless on the surface, they are incredibly, incredibly dangerous to our freedom, particularly for organic consumers who are fighting for GMO-labeling.

The Trans Pacific Partnership (TPP) is a trade agreement that is being negotiated in complete secret by the White House. Not only will it eliminate our basic democratic rights as American citizens, but it will put corporations in full control of how society is run.

Among other things, food safety standards around the world could be lowered and the agreement could make it illegal to label GMOs.

The one frightening provision in TPP is something called the “Investor State Dispute Settlement”. This could allow U.S. and foreign corporations to sue governments if these governments enact policies that are harmful to corporate profits.

So, if a government passes a GMO-labeling bill or an environmental law that protects consumers but hurts corporate profits, corporations can sue these governments for lost profits and essentially force them to reverse their laws.

U.S. Senate Finance Committee Chairman Orrin Hatch (R-UT) and Senator Ron Wyden (D-OR) have cut a deal with the Obama administration to push this secret trade deal through Congress before Americans can learn what’s even in the agreement.

And The New York Times is reporting that “Congress would have the power to vote on the TPP once it is completed, but lawmakers could not amend it”.

There have been massive protests in Europe against the TPP and TTIP (a similar trade agreement with Europe) because they know just how disastrous these agreements would be. I was also interviewed on RTL (see video below), the major television network in Holland, warning Europeans to fight against these agreements.

Please sign Food Democracy Now’s e-petition, telling Congress NOT to pass TPP and other harmful trade agreements that would benefit companies such as Monsanto. It is imperative that GMOs be labeled and the rights of consumers be protected.

Thank you for your concern.

(Below is the video where I was interviewed by RTL. Except for my quote, the video is all in Dutch. My piece begins at the :39 seconds mark.)

Want to learn about the most important organic food products and trends?