In all honesty, I am not a huge coffee drinker. So, when it comes to the up-and-coming trends in the coffee world, I am definitely not ahead of the curve. Yet, when I was at BevNET Live recently and watched RISE Brewing Co. win the 13th Annual Beverage Showdown, it was clear that I was missing something. […] 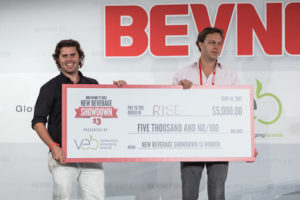 In all honesty, I am not a huge coffee drinker. So, when it comes to the up-and-coming trends in the coffee world, I am definitely not ahead of the curve.

Yet, when I was at BevNET Live recently and watched RISE Brewing Co. win the 13th Annual Beverage Showdown, it was clear that I was missing something. And I knew that I had to take a closer look.

After I did, I thought to myself that this could very well be the next big organic beverage success story to come out of New York City.

Rise Brewing sells cold-brewed, fair-trade, organic coffee that is infused with nitrogen. Also, known as nitro coffee, this is becoming a serious category onto itself in the coffee industry, particularly since Starbucks, Dunkin’ Donuts and Stumptown have all gotten into the game.

What makes nitro coffee so unique is that the nitrogen gives the coffee a foamy or creamy texture, and it doesn’t have the harshness of a regular black coffee. Nitrogen also serves as an important natural preservative, which allows it to stay fresh for five months. Additionally, nitrogen has no impact on caffeine levels.

“I was just looking for a different coffee experience, something without the cream, fat or chemicals,” said Co-Founder Jarrett McGovern, when he started tinkering with the cold-brew that he was making in his apartment.

With the good fortune of having a friend who was a brewer, he began to infuse nitrogen into the coffee and worked on refining the flavor, using different roasts and beans. In the spring of 2015, chefs at Brooklyn’s Colonie tasted Jarrett’s nitro coffee and ordered a keg of it for their restaurant. Despite the fact that he had no brand and no formal company established at the time, he delivered a mini-keg to the restaurant — via the subway.

The real turning point took place three weeks later when a patron of Colonie asked if she could have this nitro coffee in her office.

“Of course, we said ‘yes’ but we didn’t know how we were going to do it,” acknowledged Jarrett McGovern.

Needless to say, he and fellow Co-Founder Grant Gyesky quickly figured out how to incorporate a nitro stout tap and nitro stout power into the keg, and demand for his coffee soon came pouring in.

Aside from its own café on the Lower East Side, RISE is now in over 200 offices in New York City and at all Juice Press locations, as the two companies have a collaboration. Outside of New York, RISE can be found in Los Angeles, San Francisco, Boston, Philadelphia, Washington, D.C. and The Hamptons.

In order to help manage the explosive growth, the company has since added two other co-founders to join the team — Justin Weinstein and Hudson Gaines-Ross – and built its own brewery with the profits that it has generated.

Even though many of the major coffee players have launched their own nitro offerings and there is more competition in the space, this actually benefits RISE. Right now, most consumers are still unfamiliar with nitro, so any additional marketing or education that these corporations do will expand the overall market.

However, RISE stands apart because of its great taste, authenticity, organic certification (most of their competitors are not organic), use of ultra-purified water, and the fact that it is an aggressive upstart who has built a very loyal fanbase in a short period of time.

“We didn’t know it would be a business. We just wanted a refreshing, tasty coffee that had good organic ingredients and no calories,” admits Jarrett McGovern.

And this is exactly how so many of the great organic companies get created – from a founder filling a personal need that is not being met in the marketplace.

It is simply a matter of time before RISE Brewing Co. becomes a very prominent, widely available, national brand.