Dave's Gourmet Wants to Pay You up to $1,000,000 for Your Amazing Homemade Sauce

The maker of one of my absolute favorite organic pasta sauces, Dave’s Gourmet, whose sauces have won best in the industry awards two years in a row, is running a very interesting contest right now. Instead of offering someone a few thousand dollars for a great recipe, Dave’s Gourmet Recipe Challenge is taking it to […] 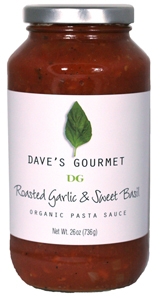 The maker of one of my absolute favorite organic pasta sauces, Dave’s Gourmet, whose sauces have won best in the industry awards two years in a row, is running a very interesting contest right now.

Instead of offering someone a few thousand dollars for a great recipe, Dave’s Gourmet Recipe Challenge is taking it to a whole new level.

If Dave’s Gourmet thinks that your pasta sauce, dip or salsa is that unique, the company will manufacture and sell it, and you could earn up to $1,000,000 in royalties for the first six years.

According to Dave Hirschkop, founder of Dave’s Gourmet, “I know that somewhere, someone is home making their own sauce because they know it’s better than anything they can get at the supermarket. Well, I want that sauce. I want to manufacture it and bring it to people around the world. The only problem I’ve had in that equation was how to find it.”

Personally, I’ve never seen anything like this in the organic industry before but absolutely love it!

It is a huge win-win for both parties. Why?

Dave’s Gourmet will be able to tap into the creative wisdom of the general public, utilize someone else’s delicious homemade recipe (thereby not spending precious time and money on product research), and use it to help boost sales and its brand.

Those are the benefits for Dave’s Gourmet. But what immediately came to my mind was “Why would someone who has a fantastic homemade recipe not want to go sell it themselves?”

After speaking with Dave Hirschkop, the answer became painfully obvious as there are many reasons why the do-it-yourself option is not a no-brainer.

First of all, running a food product company is very difficult. Not only do you have to come up with a recipe that can be produced in a cost-effective manner at scale, but building a well-oiled distribution and sales channel can take a long, long time.

And I haven’t even mentioned the investment capital needed to launch a food product company.

What makes this contest so favorable is that someone can participate in the upside of a successful pasta sauce or dip while leveraging Dave’s Gourmet many years of manufacturing/marketing expertise and established distribution network.

Furthermore, Dave’s Gourmet takes all of the financial risk and the winner takes none.

Here’s how it works:

• Entrants have to warrant that they own that recipe outright.

• From January 1-4, 2012, Dave’s team will test the recipes and choose a group of semi-finalists.

• Sauces will be judged in five categories – taste, appearance, creativity, consumer appeal and the recipe’s ability to be mass-produced.

In other words, if Dave has to hand-cut bay leaves from trees found only in the southernmost tip of Italy in order to make your sauce, it might be too difficult for him to mass-produce.

• Between January 15th – 17th, hundreds of food professionals attending the Fancy Foods Show in San Francisco will taste the finalists’ entries and will vote for their favorite.

• On January 18th, the winner or winners will be announced and notified.

• Within two weeks of being notified, winners must sign some paperwork and collect their advance of $2,000.

• The sauce will be produced for Dave’s Gourmet’s retailers and might have the winner’s name right on the label.

• The winner will receive royalties for 6 years, up to $1 million.

ABOUT DAVE AND DAVE’S GOURMET

When I started livingmaxwell, a little under two years ago, Dave’s Gourmet Organic Pasta Sauce was one of the very first products that I had on my site. The pasta is chunky, tastes like real food and has spectacular flavor. (If you haven’t had it, definitely give it a try.)

Now married with three children and living in San Francisco, Dave Hirschkop originally opened a mom and pop restaurant called Burrito Madness. It was there that he first began experimenting with hot sauces, later moving into pasta sauces.

He started Dave’s Gourmet 18 years ago and now has products in major retailers like Safeway, Williams-Sonoma, Whole Foods and Costco.

Dave Hirschkop said that “I wasn’t anyone special when I started my restaurant and then moved into manufacturing sauces. I’m just like everyone else and that’s why I know that somewhere out there, someone just like me is standing in their kitchen stirring a sauce that could very well be the best one in America. So, I’m going to find out where it is.”

Is that sauce sitting in your kitchen? If so, get in touch with Dave and let him know.

Also, if the winner of Dave’s Gourmet Recipe Contest is an organic sauce and is something that I believe to be just as good as Dave’s other sauces, I will be profiling it here on livingmaxwell. 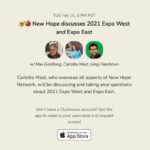