Very recently, a piece of dangerous legislation was introduced into Congress that would deny your right to know if food is genetically-engineered or not. Dubbed the “Safe and Accurate Food Labeling Act”, this bill was co-sponsored by U.S. Representatives Mike Pompeo, a Republican from Kansas, and G.K. Butterfield, a Democrat from North Carolina. Unfortunately, there […] 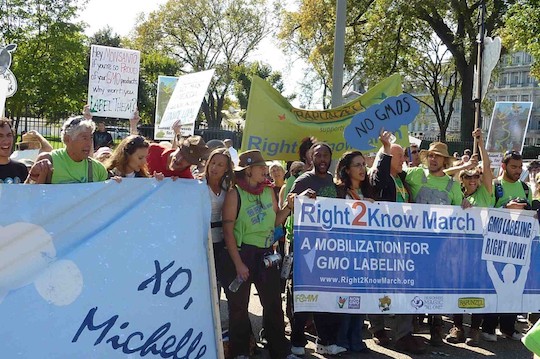 Very recently, a piece of dangerous legislation was introduced into Congress that would deny your right to know if food is genetically-engineered or not.

Dubbed the “Safe and Accurate Food Labeling Act”, this bill was co-sponsored by U.S. Representatives Mike Pompeo, a Republican from Kansas, and G.K. Butterfield, a Democrat from North Carolina.

Unfortunately, there is nothing “Safe” or “Accurate” about this deceptive bill, and organic advocates are correctly calling it the “Deny Americans the Right-to-Know Act (DARK Act)”.

This shameful piece of legislation would:

* Prevent states from adopting their own GE-labeling laws.

* Block any attempt by states to make it illegal for food companies to put a “natural” label on products that contain genetically-engineered ingredients.

* Prevent the Food and Drug Administration from requiring companies to label genetically-engineered ingredients and instead continue a failed “voluntary” labeling policy.

Why are these politicians introducing this bill?

There are several reasons.

1) Because they are completely beholden to interests of Big Ag and the Grocery Manufacturers Association, both of whom view the labeling of GMOs as very problematic. Why are they against GMO-labeling?

If people see the words “Made with Genetically Engineered Ingredients” on a label, consumers will start asking serious questions and may not buy the product. As such, GMO-labeling poses a real financial threat to their business.

2) Since states are tired of the federal government not doing anything about GMO-labeling, they have therefore taken matters into their own hands. 26 different states have GMO-labeling bills that are currently seeking approval, and Connecticut and Maine have already passed bills.

To counter these measures, the DARK Act would override anything that the states do and render any state-level GMO-labeling laws as null and void.

Making matters worse is that it would place all of the GMO-labeling power in the hands of the FDA, which is easily controlled by Big Food and lobbyists.

3) Many major food companies, including Naked Juice, have faced class action lawsuits for using the word “natural” on products that contain genetically-engineered ingredients.

There is absolutely NOTHING “natural” about GMOs. They are engineered in a laboratory and DO NOT exist in nature.

Yet, these lawsuits are expensive and cause serious brand and financial damage to the food corporations. The DARK Act would prevent any state-level laws regarding the word “natural” on products that contain GMOs.

Another very worrisome aspect of this legislation is the Non-GMO labeling standard which will be defined.

The DARK Act would require the FDA to define regulations that specify a maximum level of inadvertent GMO presence that is allowed in foods bearing the Non-GMO label.

Since the entire world’s food population is so contaminated by GMOs, it is nearly impossible to find a food that is 100% GMO-free. As a result, the Non-GMO Project and the European Union both have a threshold of 0.9% or less.

Imagine if the FDA said that an inadvertent GMO presence of 5 or 10% would qualify for a Non-GMO label! This would render the Non-GMO label as virtually meaningless.

As you can tell, this DARK Act will deny American citizens our fundamental right to know what is in our food.

64 countries around the world, including Russia, China, and Saudi Arabia, believe their citizens have this right and passed their own GMO-labeling laws.

Please contact your elected politicians in Washington D.C. and demand that they reject the Safe and Accurate Food Labeling Act – HR 4432.

You can do so by:

Thank you so much for taking action and demanding that we have a fair and just food system.

……And in case you were wondering, where is President Obama in all of this?

Despite his 2007 campaign pledge to label GMOs, don’t count him on him to betray his friends (donors) in the biotech and chemical industries if this bill does get approval in Congress.