Be clear about one thing: The current administration is about as “anti-organic” as you can get and don’t let Michelle Obama’s token organic garden (which wasn’t even organic since the soil was tested as very toxic) fool you. Recent developments in Washington D.C. are nothing short of infuriating and disheartening for people who love organic […] 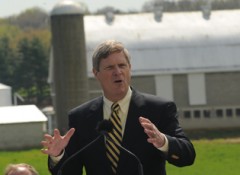 Be clear about one thing: The current administration is about as “anti-organic” as you can get and don’t let Michelle Obama’s token organic garden (which wasn’t even organic since the soil was tested as very toxic) fool you.

Recent developments in Washington D.C. are nothing short of infuriating and disheartening for people who love organic food.  Just within the past month, this has happened:

The FDA declared genetically-engineered salmon to be safe, and approval of this fish appears to be imminent.

This is an absolute disaster. Why? Well, there are many reasons and expect the flood-gates to open to other genetically-engineered animals. Cattle and pigs are sure to be next.

In the U.S., genetically-modified food does not have to be labeled as such. So, when you go to a market and order salmon, you will have no idea if what you are buying has been manipulated in a laboratory or not.

PLEASE send in your email protesting this.

On August 13, 2010, a federal judge ruled that the USDA could not approve the planting of genetically-engineered sugar beets after this specific date because the agency had failed to deliver an environmental review. The agency needs to prove that GE-sugar beets do not contaminate organic sugar beet farms and don’t cause superweeds.

Proving this will be very, very difficult because we know that GMO crops do cause superweeds and do contaminate similar organic crops.

Maybe that’s the reason that the USDA and its head, Secretary Tom Vilsack (pictured above), have decided to completely circumvent the rules.

On September 1, 2010, the U.S. Department of Agriculture’s Animal and Plant Health Inspection Service (APHIS) announced that it was in the process of issuing permits to authorize the planting of GE-sugar beet seedlings this fall, without performing any review of the crops’ environmental impacts.

These GE-beets have been altered so that they can tolerate being sprayed with Monsanto’s herbicide Roundup.

According to The Center for Food Safety, the unprecedented permitting process for a commercially-grown genetically engineered crop was initiated without public notice and comment or any environmental review. Two weeks ago the agency met with companies involved and invested in promoting the gene-altered crop.

Am I missing something or wasn’t the USDA instructed not to permit GE-sugar beet planting until an environmental study was completed???????

APHIS is justifying its actions by saying it is permitting for seedlings, which cannot be flowered or sold. Huh? If that is truly the case, then why is it doing this in the first place?

Andrew Kimbrell, the Executive Director of The Center for Food Safety, says that the “USDA has become a rogue agency in its regulation of biotech crops. Despite numerous court opinions, congressional mandates and federal investigations, it continues to act illegally. The agency and Secretary Vilsack seem to see their mission as defending Monsanto’s bottom line rather than protecting farmers and consumers.”

Secretary Vilsack would not be going against a court decision without first receiving approval, or probably encouragement, from the White House. The power that Monsanto and other GMO-advocates wield within this administration is simply amazing.

The message from the White House is crystal clear: Helping major ag companies, who have a serious financial stake in promoting a GMO-agenda, is much more important than providing the citizens of our country the best, most nutritious and environmentally-friendly food you can buy — organic food.

Even if it means breaking the law.