THIS POST HAS BEEN UPDATED AS OF 5/1/14. The EPA has announced a proposal to allow 2,4-D to be sprayed on genetically-engineered corn and soy crops. Please read below and take action. —— If you are under the illusion that our government will take the necessary steps to protect the health of its citizens, think […] 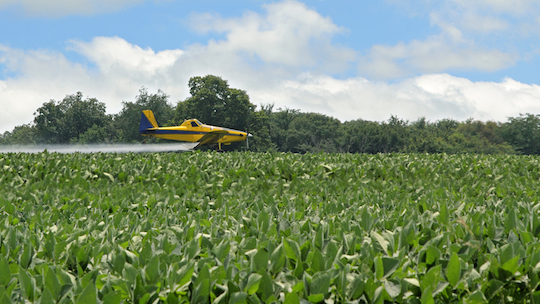 The EPA has announced a proposal to allow 2,4-D to be sprayed on genetically-engineered corn and soy crops. Please read below and take action.

If you are under the illusion that our government will take the necessary steps to protect the health of its citizens, think again.

Not only did a Harvard professor recently publish a report saying that the FDA suffers from “institutional corruption” and that “meeting the needs of the drug companies has taken priority over meeting the needs of patients”, but now we have more tangible proof of government agencies putting corporate profits ahead of the well-being of the American people.

The USDA just released a draft of its Environmental Impact Study (EIS) on genetically-engineered corn and soy crops that are resistant to the chemical 2,4-D. Despite massive protests, this favorable EIS report will essentially guarantee that these crops get approval.

First off, you may be asking: what is 2,4-D and why should we be so alarmed about it?

2,4-D was the primary ingredient in Agent Orange, the herbicide warfare program during the Vietnam War that killed or maimed 400,000 people and left 500,000 children with birth defects.

But it wasn’t just the Vietnamese who suffered. U.S. soldiers came back from the war and realized that exposure to Agent Orange had greatly impacted them as well.

According to the U.S. Department of Veteran Affairs, Vietnam veterans exposed to Agent Orange suffered from some of the following diseases:

Advocacy groups, such as the Natural Resources Defense Council, have also cited numerous studies linking 2,4-D exposure to serious illnesses and cancers, including non-Hodgkin’s lymphoma. Children, in particular, are extremely vulnerable to 2,4-D exposure, which will come about as a result of drift when the herbicide gets sprayed on farms.

With approval of these GE-crops resistant to 2,4-D imminent, this super-toxic chemical is now going to used with reckless abandon all over our country. It is estimated that by 2019, usage will explode and an estimated 100 million pounds per year will be sprayed on our farms.

Dow AgroSciences, the owner of these new GE-crops, has convinced our policymakers that we “need” this chemical in the marketplace for one simple reason: superweeds.

As profiled in the New York Times, superweeds have become resistant to the well-known and widely used herbicide RoundUp. So, these weeds now grow uncontrollably all across the U.S. and have infected 13 million acres of farm land.

How to deal with this?

Throw more toxic chemicals at the problem, of course. (The idea is to plant these genetically-engineered corn and soy crops, and spray them with 2,4-D, with the goal of killing the superweeds that grow around the corn and soy but not kill the crops themselves.)

Just like they tell us that GMOs are completely safe – even though no long-term testing on GMOs has EVER been done on humans – we are now being told that 2,4-D is completely safe.

And if you think that the poisonous chemicals currently being sprayed on our farms aren’t already causing damage, then please read the following:

– Atrazine has been found in 94% of our water supply.

– The water supply is so toxic in farming communities in California that citizens MUST buy bottled water.

– Water supply in the Midwest has become a serious health risk.

– 59 different pesticides have been found in our water supply.

The biggest irony about these soon-to-be-approved GE-corn and soy crops is what can be found in The President Cancer Panel report.

Not only did the report say that “the true burden of environmentally induced cancer has been grossly underestimated” and that “exposure to potential environmental carcinogens is widespread”, but “the Panel urges you (President Obama) most strongly to use the power of your office to remove the carcinogens and other toxins from our food, water, and air that needlessly increase health care costs, cripple our Nation’s productivity, and devastate American lives.”

Approving these GE-crops resistant to 2,4-D goes completely against what the President’s Cancel Panel report has recommended. And what will President Obama do about it?

Nothing – because it would upset the large chemical companies.

It is beyond comprehension how a government that is supposed to protect us will allow this super-toxic chemical to be sprayed all over our land, which will sicken our people, our land, and our water supply.

Even though the likelihood is very strong that the USDA will eventually approve these crops, it is essential that we have our voices heard because it is not a done deal yet and our government MUST understand our level of anger.

How can you help?

Below is a video from CBS News talking about “Agent Orange” Corn.

Want to learn about the most important organic food news?